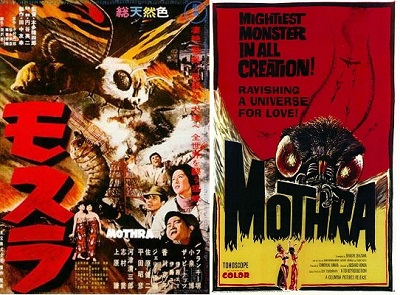 Hello, kaiju lovers! Our subseries “Godzilla Redux” continues with what some call Toho screenwriter Shinichi Sekizawa’s masterpiece: Mothra (1961). Becky “Bex” Smith of the Redeemed Otaku podcast joins Nate to discuss this film—because apparently Nate can’t talk about a Mothra film without her. While Bex seems weirdly obsesses over the genus names of insects, Nate regales her with kaiju-sized info bombs related to the making of the film, the historical backdrop against which it was made (controversial treaty renewals with the U.S.), and the often crazy interpretations academics and critics have of the film (blackface, anyone?). That’s just some of what you’ll learn about this kaiju classic!

Beforehand, Nate meets with his pseudo-sister, the semi-secret magical girl Jessica, who’s just been promoted to director of tourism on the Island. They discuss her new job and awkwardly talk about her seeming crush on Legal Action Team paralegal, Gary. After the broadcast, though, Nate and company discover “Bex” isn’t who she appears to be—and Crystal Lady has to get involved.

This episode’s prologue and epilogue, “Bexy a Traitor?! The Church of Mothrianity Attacks!”, was written by Nathan Marchand with Becky Smith and Daniel DiManna.

Sound effects sourced from Freesound.org, including those by InspectorJ.