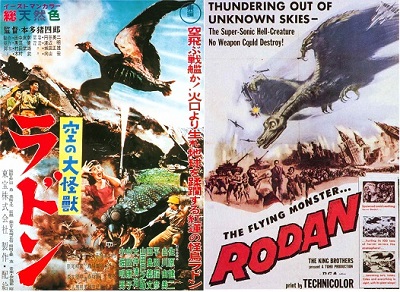 Hello, kaiju lovers! YouTuber and aspiring filmmaker Kaiju Kim returns to Monster Island to discuss a nostalgic monster movie for her: Toho’s first kaiju movie in color, Rodan (1956). It may not have Big G in it, but Rodan debuted in this film and later became a staple of Toho’s flagship franchise. Amidst funny accents, cancelations (sorry not sorry, Jimmy), and talk of Meganula breakfast cereal, Kim and Nate discuss the film’s Japanese communist screenwriter, Takeshi Kimura, the infamous Mantell UFO incident that inspired the film, and the symbolism of the monsters. If ever there was an episode that exemplified our mantra, “Entertainment and enlightenment through tokusatsu,” it’s this one.

Before the broadcast, Nate visits the Monster Island Legal Action Team office to collect his new contract, and after getting an update from Gary, Raymund Martin bursts in and claims he was a Goranger back in the day. Let’s just say there isn’t enough salt in the ocean for Nate to take with Raymund’s story.

Check out Kaiju Kim’s YouTube channel, including her Rodan review.

Read Jimmy's Notes on this episode.